Care For The Oceans

Conservation of the oceans and its reefs

A gathering of like minded people and the Sunshine Coast Environment Council met at the HMAS Brisbane War Memorial at Alexandra Headlands, South East Queensland this week. A call was put out to all Sunshine Coast divers, tourism operators, conservationists, scientists, fishers and other marine loving people to show their support for our marine sanctuaries.

The crowd and supporters unfurled an enormous colourful banner which celebrated the alliance of many groups and people with a common interest in marine conservation and sealife diversity. The banner comprised hundreds of photos on it taken by people across Australia over this summer highlighting the diversity and strength of support in the community for marine sanctuaries.  The banner was produced by the Save Our Marine Life Alliance.

It is a fabulous web site with some great information and news relating to conservation, education and research of the ocean.

Shark biologist Dr. Ryan Kempster founded the Support Our Sharks (SOS) Ocean Conservation Society in 2010 with a mission to support healthy oceans by promoting better protection for sharks and their close relatives the rays and skates.

SOS is a science-based conservation group raising awareness to the threats faced by sharks (and rays) in the 21st century.  Dr. Kempster established SOS with the goal of educating the public by promoting conservation, outreach and research to inspire interest in protecting these important animals.

They utilise a mixture of on-the-ground and online campaigning, educational outreach and peer-reviewed scientific research to encourage better protection for sharks and rays, whilst also promoting better protection of our delicately-balanced ocean ecosystems. By working closely with the general public and a wide range of specialist groups including scientists, divers and politicians, they are able to bring about positive change for sharks and their relatives worldwide.

This great short but punchy video discusses how long sharks have existed. It’s a must watch! 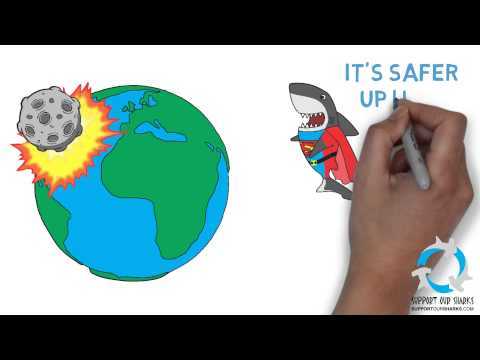 Below is a recent article written by Kathy Sundstrom  in our local Sunshine Coast Daily newspaper published on the 9th October 2014. She called me for a phone interview brought on by the recently reported shark encounter in Mooloolaba.  The following article was the result of that discussion:

“A RESPECTED shark expert has called for mandatory education in schools and for tourists to make them “shark-savvy” following video footage of a great white circling a boat off Mooloolaba.

Darryl Kitching said he was terrified when the five-metre-long shark circled the family’s seven-metre boat for about 20 minutes, sometimes nudging its side.

Mr Kitching said it was something he had never experienced in his 40 years of fishing.

Shark expert Tony Isaacson of Kawana, said there was likely to be a number of great whites off the Coast as they followed humpback whales heading south.

Mr Isaacson said that with proper education, people need not fear sharks and he could not understand why this was not taught at schools and to tourists visiting the area.

“People need to be shark-savvy,” he said.

He said an incident at Byron Bay earlier this month in which a swimmer was killed by a great white happened “a year to the day” he had an encounter with the feared species in the same location.

“I was filming grey nurse sharks and then they started forcing me down to the ocean floor,” Mr Isaacson said.

“I had never had this experience before and couldn’t work out why they were pushing me down.

The next thing I saw a 4.5 metre great white above them. This is not unusual, but they are usually quite well fed.”

Visit the Daily’s website to see Mr Kitching’s video of the great white.

Twenty-six sharks have been caught in nets or drum lines off the Coast since January.

Sharks caught in nets and drumlines, January 1 to September 30:

Some safety tips to minimise the chance of shark attack:

Also read our recent article on the new Clever Buoy technology which holds promise for a new and better way of dealing with sharks on our beaches:  https://divecaredare.com/clever-buoy-trials-and-shark-control-program/

Several events in September, 2014, prompted me to take personal responsibility for a call to fast track better Shark Control Programs:

Hanna, a high school student who spoke at a rally on the Gold Coast where she asked everyone present to help stop the culling of sharks in Queensland.

A recommendation by the EPA to discontinue the shark culling in Western Australia in the wake of 6751 public submissions and petitions with over 25,000 signatures.

The People’s Choice Award for “Most Dynamic Display”: SOS – Save Our Sharks won at the Sunshine Coast “Kids In Action” conference.

An invitation to celebrate with the Kids In Action winners at The Spit, Mooloolaba, where the shark nets for the Shark Control Program are stored.

Sensational media coverage relating to sharks that came to the attention of an international competitor ahead of his arrival as our guest for the Sunshine Coast Ironman Event.

High school student, Hanna, asking the public to write to Ministers for Fisheries and their Ministers for the Environment to highlight the effective and non-lethal alternatives to shark nets and drum lines such as shark spotter programs, clever buoy and eco shark barriers that our governments could be implementing, at no higher cost to tax payers than the culling programs currently implemented

The essence of email to my local, state and federal representatives, federal minister for the environment, state minister for fisheries and reviewers/manager of the Queensland shark control program follows:

END_OF_DOCUMENT_TOKEN_TO_BE_REPLACED

GREAT WHITE SHARK TO BE KILLED AFTER ATTACK AT BYRON BAY, NSW?

Leading the evening news stories, Tuesday, 9th September, 2014 ahead of Royals, bombings and political scandal was the unsuccessful rescue and fatality of a lone swimmer at Clarkes Beach, Byron Bay, NSW. The bite to Paul Wilcox’s leg at 10:45 am in clear water at a sand bar, 15 metres from shore, was witnessed by his wife. The 3 metre, sub adult, great white shark that was believed to be responsible for the bite was chased out to sea. On initial, unsubstantiated reports, the great white shark was to be targeted with lethal action should it return to Byron Bay. Such a response reinforces the popular view of the ”Jaws” generation that there is a public risk and a ‘rogue’ shark problem that must be solved with lethal force. END_OF_DOCUMENT_TOKEN_TO_BE_REPLACED