The Sardine Run is a very special natural phenomenon.  The sheer number of sardines involved results in a feeding frenzy along the coastline of South Africa and in terms of biomass is said to rival East Africa’s great wildebeest migration.

The Sardine Run is where shoals of sardines drift north up the east coast of Africa to KwaZulu Natal and Mozambique from the cold waters of the Cape of South Africa.  These shoals can be more than 7km long, 1.5km wide and 30m deep and are very easily spotted by planes or from boats on the surface.

It is usually around May-July and involves billions of sardines. They spawn in the Agulhas Bank, the southern most point of South Africa and then head north along the south east coast of Africa. The run occurs when a current of cold water heads north from the Agulhas Bank to Mozambique, where it heads out into the Indian Ocean.  The Agulhas current is a warm, more northern current that pushes the cooler Atlantic southern current up against the east coast and hopefully forces the drifting sardines inshore so the run can be witnessed.

The Sardine Run is all about the water temperature. It has to fall below 21 degrees to happen. Sardines need cold water and will not be seen if the water is too warm. The run does not occur every year and in the last 23 years, it has failed on three occasions including 2003 and 2006. This year the weather is quite unseasonal. Today the air temp is 25C, unheard off at this time of the year.

DIVING A BAIT BALL IS ALL ABOUT ETIQUETTE IN THE WATER

The dive and snorkel briefing is all important as this is such an unusual phenomenon, if you do the wrong thing, you will disturb the bait ball action and it all ends for everyone.  Then the search has to be repeated to find another bait ball.

Dive briefing from the Dive Master in the boat

The Sardine Run is all about finding the bait balls to experience and capture the action of the fish and the birds mainly gannets. The day starts around 8am and finishes around 3-4pm. The whole day is spent in an uncovered, semi-rigid, inflatable dive boat which makes for a hard long day in the office. Sunscreen and water are essential.  The spotter ‘mosquito’ ultralight plane and the highly experienced Dive Master and Boat Skipper all keep an eye out searching for the bait balls.

Spotter plane in the air, gannet and divers in the water

And it’s all about waiting, waiting, waiting, then “Hurry up, everyone in the water!”  When located, the bait balls can move quite fast so you have to be suited up ready to jump in the water. The rule is everyone snorkels or scuba together. There can be no mixed groups. With every minute they can have moved another 20m away so you have to be alert for the signals of the Dive Master to be ready. A lot of the action is snorkelling on the top as the fish are just below the surface and often enough scuba tanks are not necessary or too cumbersome, as we found.

A big clue is the action of the birds. If they are diving, generally there is a bait ball there. The ball starts by groups of common dolphins herding the sardines to separate them off from the main shoal, concentrating them into a ball. They circle and circle and slowly push them towards the surface by working together as a group. Then when the sardine ball is tight, the females are the first to eat from the edge of the ball.

Dolphins herding a bait ball near the surface

The birds then dive in from the top to feed and the sharks feed from the bottom of the ball. The action for photography is all around 5-15m and can all be done by snorkelling.

Gannets dive in and feed from the top of the ball

Shark feeding from the bait ball

If the ball approaches you, you should swim away from it. You don’t want to upset the bait ball action or it will dissipate. Stay around the edge of it. If you happen to snorkel on the top of the action, you will upset the birds, which upsets the dolphins, the sharks and then the whole thing dissipates.

Snorkeling at the top with the dolphins

The sharks are zambezi’s, oceanic black tips, raggies or dusky sharks. If you get too close, you may disturb them feeding or you may get in their way when one goes into the bait ball to feed and you may be accidentally bitten. You may even be lucky enough for a bryde’s whale to come in at the bottom.

Shark exiting a bait ball with dolphin in the background

When a bait ball is formed it is completely eaten by the action of the predatory creatures, unless disturbed and dissipated. Once eaten, we have to move on to find another bait ball.

If you obey the diving etiquette, you will be rewarded with a great experience.  This is a full on day of both waiting around and fast action.  And boy when you are rewarded with a bait ball or two its makes it all so worthwhile. 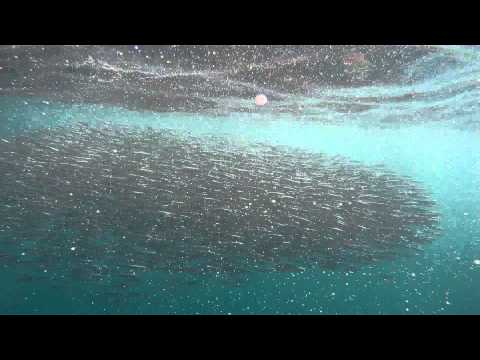 So far this season there have been some bait balls but not many as the full run does not seem to have happened as yet. But we were blessed today with some small bait ball action, a dream come true and so lucky given the unnatural conditions. Despite scouring the oceans both north and south of the bay, we eventually found three bait balls, all 400-500m off our own beach.  And these sardines moved. It was a real work out trying to time it so we could get in the water and keep up with the ball.  At one point we were almost being pulled along hanging onto the side of the boat in an attempt to catch up with a ball which had moved on by the time we entered the water.

Dolphins herding the ball at the surface

And then, suddenly the ball would revert in its path and come back at you. For all the dive briefing about staying away from the edge of the ball or the surface of it, yeh right.  If it comes straight back at you, you can’t get out of the way fast enough. Poor Warren, one of our group got caught up in a sudden change of direction of a ball and was completely blinded by diving birds on top of him with their column of bubbles all around him. All he could do was to point his GoPro downwards to see if he could get the ball of pilchards on film and keep his head covered!

Gannet, too close for comfort

Another snorkeller was also caught up in a ball that suddenly changed direction and everyone was witness to the bait ball suddenly defusing in a split second, stopping all the action. Oops! No names shall be mentioned but a pair of red fins can be quite distinctive.

Snorkeler at the edge of the bait ball

So despite the detailed bait ball briefing, the action when it happens is very quick and chaotic, and you need to have a certain level of fitness to be able to fin fast enough to keep up with the ball. Today was testament to that but we still managed to get some great footage and personal encounters. And no one got injured or speared by a diving gannet!

Diving gannets, bait ball and dolphin below, all working together

[DiveCareDare would like to acknowledge Sebastiao Carmo and Dominik Radler for their photography of the bait ball action. For more photos by them see Photos-Diving Photos-South Africa]