FLYING THE ‘MOSQUITO’ SPOTTER PLANE FOR THE SARDINE RUN

Irene, Louis and his ultralight ‘mosquito’

Big Louis is the man. He lives in Limpopo, the northern most province of South Africa and owns a 2-stroke ultralight spotter plane, aka ‘the mosquito’.  He comes down to Coffee Bay with his wife, two teenagers, yorkie and 6 week yorkie x schnauzer puppy purely for the Sardine Run. It is his third or fourth season with Roland and Beulah and they work together as a team. His mission is to be the ‘eye in the sky’ and fly all day up and down the coast around Coffee Bay in search of the sardine action for African Dive Adventure clients.

I had the pleasure of going up with him today to experience the Sardine Run from this different perspective. After a spectacular day yesterday with the best personal encounters of whale action you could ever wish for, I was more than happy to give up my seat in the boat for another kind of action in the air.

Louis kitted me up on the beach outside the Ocean View Hotel with a helmet, microphone and seat belt. I had to make sure both my cameras were securely fastened to my person. Nothing was allowed to be loose or it could fall in the water, worse still hit Louis on the head or fly into the small engine behind me and stall the plane. With that in mind and a little intrepidation, off we went. 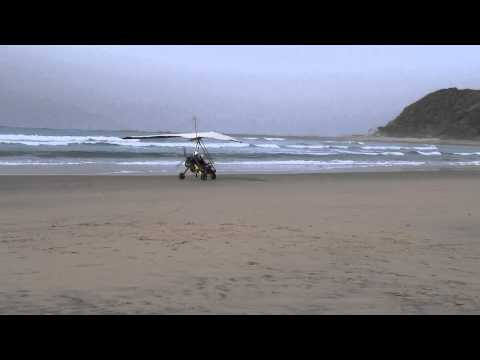 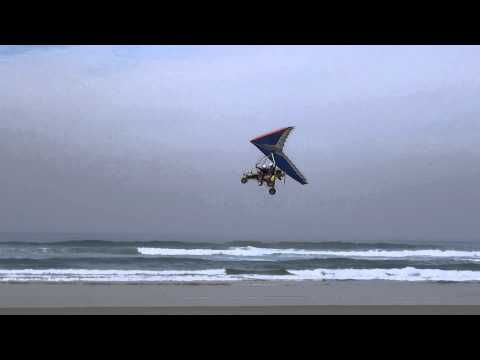 Tony with intrepidation – thumbs up!

Flying was noisy but we had headphones to able to communicate with each other. Louis also had a two-way radio to talk to John Pierre, the Dive Master in the African Dive Adventure boat below us.  We flew between sea level and about 500m high depending on what we were looking for or seeing. The sea was so calm it was like a billiard table, so if there was anything to see, we would spot it.

Scouring the ocean below us, we headed out north and did many passes looking for bird action or pods of dolphins. You need to understand that without dolphins there is no bait ball as they work the sardines first. Then the birds seem to communicate with each other and before you know it there is a frenzy of birds diving into the bait ball.  So if we saw dolphins running we tended to follow them as a clue to a possible ball being formed.

While cruising in search of the sardines, we also saw gannets, skuas, albatross and as we came in closer to shore, pods of a hundred of more of bottle nose dolphins.  I got many great shots of breaching whales.

In fact returning in the late afternoon we were lucky enough to see a humpback whale pushing her baby upwards to the surface, both then breaching.  But Louis also told me how he has had to be a little weary of flying too low in case of breaching whales. What a problem to have, but then I guess how would you explain that one to your insurance assessor – “I was just flying along and this whale came out of nowhere”.

As the elusive bait ball was no where in sight, we decided to do a tourist fly over the Hole in the Wall, a popular point of interest in the Coffee Bay area, a natural geological arch I personally wanted to visit.  It was worth the detour as it was quite impressive.

Hole in the Wall

But as sheer luck would have it, when we flew up the river to come back, that’s when we saw diving gannets directly in front of the Ocean View Hotel.  There it was, 400-500m off our main beach, a bait ball. Having gone up and down the coast, the darn sardines were right off our very own beach!

Boat heading towards the bait ball off the main beach

As we got closer we could actually see sharks and dolphins working a bait ball, and so we radioed the dive boat as it was way up north and gave them the directions to head back for. Then we went in for a beach landing and re-fuelled before some lunch at the hotel. On our return to the skies, we could see more bird action in the same area with two or three balls being formed by the action of the dolphins. Now the boat was in the vicinity and the divers were already in the water.  The bait ball was moving fairly quickly so it was difficult for the swimmers to keep up with it. Some of the fitter ones who could got right into the middle of the action.

Boat with gannets diving and divers in the water

We were also witness to the ball dissipating immediately a snorkeler went over the top of the action – umm, red fins, I know who they belong to and what’s more, I have it on video too!  But we were able to keep them in touch as to where the sardine shoal moved to and where the ball was luckily reformed by the dolphins.

Really if not for us in the spotter plane, they would never have found the bait balls. It was really by pure serendipity that we saw the bird action coming back from the Hole in the Wall, although we were going to check out that part of the coast anyway but it was just luck with the timing of it.

Bait ball with snorkeler and GoPro, with herding dolphins

And we had thought that it may have been storms and big winds that could have stopped us going out this week, but we have had the most perfect weather conditions, although too warm in general for the sardines. However whilst nobody read the actual water temperature today, the divers did say the water felt colder than previous days, so perhaps there was a belt of cold water that came through resulting in our unexpected good luck.

Hard day at the office – taking time out after a successful day!

Did I regret not going in the boat today and missing out on the only bait ball action so far this week? Well a little, but in part I feel that if we hadn’t turned inland to go to see the Hole in the Wall, we may never had spotted the sardines and so I was part responsible for seeing the bait ball and finally delivering ‘the promise of the sardine’. Day three of our four day adventure in Coffee Bay, fantastic. Yet another full evening of swapping of cards and usb sticks, definitely a sign of a good day at the office when this activity takes you well into the late evening.  Happy Days!