Gansbaai is 160kms, about 2hrs drive, from Cape Town in South Africa and is one of the best places on the planet to see great white sharks in their natural habitat.  They are the world’s top predatory fish, growing to 6m, and have the ability of launching their 2 ton bodies completely out of the water when predatory breaching for seals. This area is a major drawcard for day trips for local and international tourists to see these amazing creatures. There are many local operators offering up close and personal shark experiences.  One of the oldest, most reliable and reputable is Brian McFarlane who runs Great White Shark Tours.

I had the pleasure of going out with Brian two years ago, and when returning with our small group of intrepid shark divers this winter, I couldn’t recommend any other outfit. I knew despite the unusual conditions everyone had been experiencing over the last few weeks, Brian would still be able to offer us a great opportunity, and I wasn’t wrong. He is also the only operator to actually offer a money back guarantee if a shark isn’t sighted, so with that assurance, we all signed on.

From left to right: Brian with Mo, Dominik and Tony

The day began with a super breakfast on the deck at the crewhouse of Great White Shark Tours, which overlooks the Kleinbaai harbour.  We were given a video briefing of the trip, followed by a talk from Brian himself who always goes out on his 13m catamaran Apex Predator with his crew.

As with our experience with Chris Fallows at Seal Island earlier this week, Brian too had noticed a definite change in the shark behaviours in his area around Dyer Island and their decreased activity and sightings.  So much so that Brian had stopped using his winter mooring near Dyer Island and had gone back to his summer mooring closer to the coast. 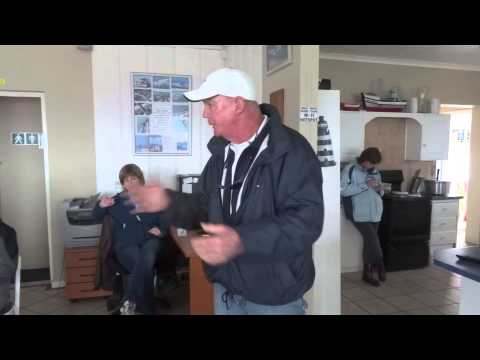 He knows the reef so well that his crew had even gone out earlier to place the shark cage in the best spot he knew so he wouldn’t be competing with other operators once his clients were on board. This proved to be a good strategy as many boats on our day returned to port with no sightings.

Brian’s has other secret strategies that he uses to increase his luck but we cannot give away his trade secrets in this blog.  He chums the water with fishmeal and his baits were a combo of a black rubber seal decoy called Gladys and fish portions tied to a rope placed both at the surface and deeper.

It usually takes about 20mins for activity and that was about on the mark.  We left at 9am and returned around 1230pm. In that time 20 sharks may have been expected in normal conditions. Brian promised at least 2 or 3, and we got around 3 or 4 in this session. His cage holds 8 divers at a time, and the boat had 32 clients on board.  We were provided with 7mm wet suits and masks (no snorkels). I wore neoprene socks and my own boots as well as a Sharkskin vest under the wet suit, which kept me warmer than most in the 17 degrees water.

The sightings were good and so close to the cage. If a shark manages to take a bait, it usually dissapears with it and is not seen again. Similarly if contact is accidentally made with the cage, that shark usually does not return. Most passes came to within 1- 5m of the cage and the visibility varied depending on the sunlight in the cloudy overcast conditions, generally being around 2-4m.  Not everyone went in the water and those who didn’t were not disadvantaged as there were excellent points of view from above.

On some trips there are also visits to Geyer Rock Cape Fur seal colony, home to 30,000-40,000 seals and Dyer Island, home to 23 different bird species.

We went out again in the afternoon and it was quite a different experience. This time we had the company of a large female shark for all of the three hours we were out. 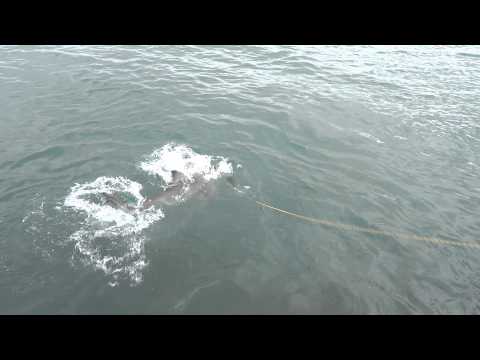 She was at least 4m in length and she managed to take Gladys the seal decoy at one point and actually tore it in half. She got a bottom fish bait as well leaving the rope dangling freely and she hit the cage at least once but continued to return for more bait.

There were also many other quite small white sharks, around 2m long.  It was all very exciting. Whilst there were no breaches, on several occasions there was a lot of thrashing at the surface chasing bait or partially contacting it, which delighted everyone on board. But every shark had its own behaviour, some being far more shy and cautious than others.  There was certainly no aggression, all the sharks were noticeably quite relaxed and totally the opposite to the Hollywood portrayal of Jaws.

Brian is very passionate about great whites and his vast knowledge and experience of the sea is second to none. He had many entertaining stories about his experiences and went out of his way to show his respect and admiration for what he considers to be a much maligned and a very magnificent creature of the sea. 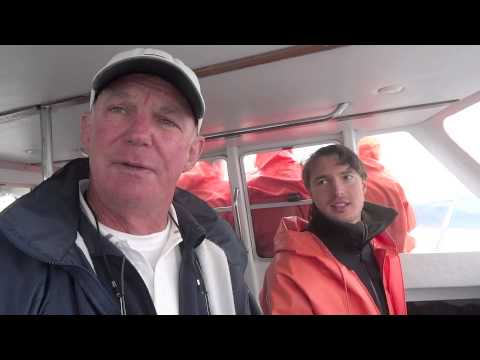 Everyone on board this day would definitely agree with him.  It is no surprise that his outfit is NUMBER #1 on TRIP ADVISOR.